As with the Welsh-Senegalese harp and kora duo Catrin Finch and Seckou Keitathe second album of, To go upa strong positive message goes through Echo, the third part of their trilogy. The Osprey and its reintroduction to Wales and migration to West Africa (symbolizing the relationship between the two musicians) was the star of To go upwhile the underlying theme running through Echo takes that sense of connection and connection and turns it into a seamless creative whole. The idea of ​​echo also highlights the importance of love, relationships, death and memory; these are big existential themes that, given the circumstances of the past two years, have been closer to the surface than normal and in the thoughts of many.

With that in mind, the album appropriately begins with a radiant track titled Gobaith, which means ‘hope’ in Welsh. Unsurprisingly, the music is beautiful in its complexity and structure. Beginning with a brilliant harp chorus, the kora arrives with splashes of color over a whisper of Claire Whitson’s rich double bass notes before the soft string introduction. Appearing on four tracks, the addition of strings is a first for the duo, marking a distinctive shift in the shape of their sound; it creates an effective difference in texture on tracks with strings involved and emphasizes space on tracks where they are absent. That said, the balance of sound is expert throughout, and the string septet never threatens to overpower the essence of sound that is harp and kora. This balance is found wonderfully on Chaminuka, a song in tribute to the late mbira player (thumb piano, see Mind Maintenance album) Chartwell Dutiro. The restraint displayed by the two musicians is a pleasure to listen to and fully illustrates the simplicity and intuition that can be heard in the most beautiful duo configurations. A repeating minimalist kora line perfectly emulates the mbira before other notes arrive to carefully enhance the arrangement. The change in sound in the second half, when the ropes swoop down and Seckou sings a lament for his friend, might have been shocking, but the production from the two players plus Tom Colvin ensures a smooth transition. 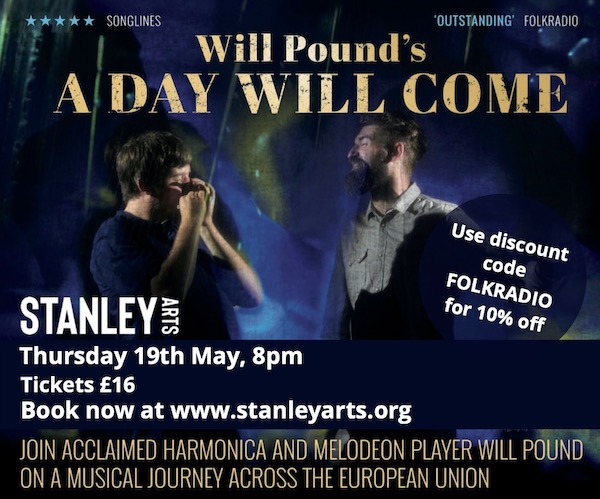 Somewhere else, Double climb dramatically increases the drama, with Seckou’s kora playing a more edgy line in the background while Catrin’s harp plays dynamically across the entire string range. A performance with virtuoso Colombian joropo harpist Edmar Castañeda, known for his high tempo string playing, was the inspiration behind this song. The influence is evident, with a jazz-inspired piece continually skipping and Catrin showing off her prowess as a technically skilled, diamond-fingered picker. The string section is absent here, which is wise, given the complexity and high energy of the two main instruments. As Catrin says, “I play every note under the sun and people love it!” There’s a suggestion of free improvisation here or at least a sense of freedom and pure energy in the music that would transfer wonderfully into a live setting. Tabadabang, a lyrical song based on family and the innocence of adventure and travel in children, is played at a much easier pace and also without the string accompaniments. The kindness and gentle playfulness that form the context of the music are perfectly represented in a sound that is both complex and playful, devoid of the sharp edges of Double climb. Instead, the music mostly remains gently euphoric, evoking that childhood innocence and subtle introduction to life’s adventures.

My favorite track on the album is the penultimate track Jeleh Calon, respectively meaning “smile” in Mandinka and “heart” in Welsh. Just like the previous song Chaminuka, the mood of this one changes midway with the introduction of the strings, but the change is skillfully done. Catrin’s plucked bass strings (mimicking the heartbeat) introduce the song before Seckou’s kora enters with a beautiful melody that lights up the music and effectively brings smiles. To me, Jeleh Calon best demonstrates the musical relationship between the two players and their closeness and evolution in this whole. The strings are a feather-light improvement and again allow the two instruments to weave majestically around each other. Another meandering song in some ways with a hint of improvisation in its structure, the music drifts and progresses like a lifetime, before it ends with Catrin’s ever-present harp ‘heartbeat’. It’s a wonderful piece of music.

Before we’ve even been led by the final song Jula Kutait’s clear that Echo is another significant leap forward for these two spellbinding musicians, and it’s a fitting finale to a remarkable trilogy. In a way, Jula Kuta is a musical demonstration of the path traveled by the two musicians, it is a piece that Seckou sat on for a while, with the intention of presenting the range from a kora to double neck he premiered in 2007. Centered around the ridiculously rich sound and the enormous challenge of playing a D-flat chromatic scale on both the harp and the kora, the song is actually quite a modest piece , displaying quiet virtuosity. It’s probably the most spacious and deliberately paced track here, also taking up the most time, at well over eight minutes. The two musicians have fun at times producing deliciously sharp arpeggios, but for the most part Catrin and Seckou are careful to let the music breathe. It works perfectly with songs like Double climb, which more dramatically demonstrates the range and ability of both players. Here, subtlety is as key a skill as speed, and the music achieves a sense of quiet satisfaction as both instruments fade away. It ends another masterpiece; a beautiful album from two artists operating at the top of their game.

Echo comes out on May 27 and comes as a beautiful 40-page Digibook with liner notes written by journalist and writer Andy Morgan.

Their UK tour kicks off this week (see dates below).

You can hear a track from the album in our latest Folk show here.

Ticket details and links can be found here: https://www.catrinfinchandseckoukeita.com/.