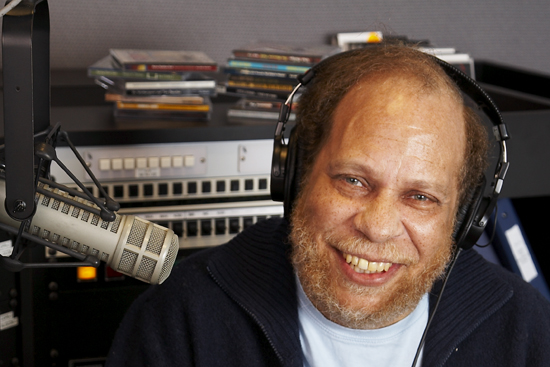 For more than three decades, as the host of Jazz with Eric in the evening (recently renamed Jazz on WGBH with Eric Jackson), the dean of Boston jazz radio, as Jackson is widely regarded, presented listeners with a seamless blend of established talent and the latest in jazz talent. He has broadcast some 3,000 interviews, with many of the biggest names in jazz, from Dizzy Gillespie to the Marsalis family.

He only thinks of the first recording he’ll play on any given night, says Jackson. He then works with the flow, articulating his show as it goes, through sound. He chooses a series of tracks based on “moods, feelings, colors, emotions, rhythms, more than style labels,” he says. With the spontaneity of a jazz soloist, he improvises his set list. “I hope I learned from the musicians I play; I hope there is a flow in the sets and the whole program.

Music permeates his life. He’s on the air from eight to midnight, Monday through Thursday, and when he’s not, he listens to music “almost all the time,” he admits. “I’m still reading and learning something that makes me switch to the CD player. All day long, I listen to music; it’s a physical process — some people would go crazy. But it’s part of me, I grow up with it. A frequent speaker and author, Jackson teaches the African-American experience through music at Northeastern University and has also developed exhibits for the American Jazz Museum in Kansas City.

Raised in a music-loving family (Father Samuel was a “big fan of jazz” and the first African-American radio announcer in New England), he went from the popular Motown music of his teenage years to the innovative jazz of Miles and Trane (Jackson calls Miles Davis and John Coltrane “the pillars of their time”) as a student. During his freshman year at the College of Arts & Sciences, Jackson applied to student radio station WTBU – “no experience needed” read the ad – and made his debut as an announcer in 1969. His first show was R&B, which he quickly expanded to three shows, adding jazz and mixed music. When he asked his program director why he was on the air more than anyone else, the director replied, “Because when you’re on the radio, I get quality radio.

Although Jackson came to BU with the intention of becoming a psychiatrist, he says he “fell more and more in love with music and decided to do something around music.” During his next two years in college, he did more radio concerts, including a jazz program at WBUR. He left BU and worked at the Harvard WHRB for the 1971-1972 academic year, then ventured into commercial radio, hosting a Sunday afternoon jazz show on WILD, “Sunrise to Sunset. He remembers. The next five years, posting to the WBCN were pivotal in exposing him to a wide variety of music, “a ton of music,” he says.

Jackson joined WGBH in 1977, and in addition to playing mixed music, he took over the animation of a weekly timeline of African American music history, Essays on black music. In 1981, when an evening shift announcer went on tour to play bass for a few weeks, Jackson replaced him. When the host did not return, WGBH offered him a spot and he launched what has become the jazz radio program in Boston, for 30+ years.

Last spring, the Boston jazz community, including impresario Fred Taylor (CAS’51) and radio personality Ron Della Chiesa (CGS’57, COM’59), along with musicians and many enthusiastic fans, came together for “Eric in Two Evenings,” hosted by the nonprofit JazzBoston in honor of esteemed jazz dean Eric Jackson.

This article originally appeared in the Fall 2011 issue of arts + sciences.

Jean Hennelly Keith can be contacted at [email protected]